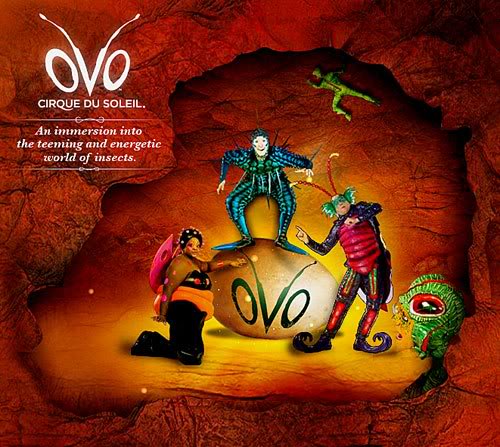 I have always loved Cirque du Soleil. They have done some amazing things in the past. But Cirque du Soleil has 3 shows in town right around the same time and I had been wanting to see OVO for a while because I thought the idea of insects and cirque together sounded like something they could really sink their teeth into and make something that took you into another world. I have a 5-year-old son so I thought he would love it.

Well I was not too impressed myself, but my son loved it.

Now don’t get me wrong, there ARE some amazing acts in this show…the slack wire act, the double strap act and as everyone else has mentioned, the trampoline act…the Chinese yo yo’s…. but overall, I really felt like cirque is just repeating the same old stuff as I have seen before.

First of all, the music was pretty bad. I mean “La Cucaracha?” that’s all you’ve got? really? ugh. It’s hard to appreciate a really good act when the music is so terrible.

The clowns were the worst I’ve ever seen in a cirque show… their language consisted of maybe two or three words over and over… buzz buzz weee weee, UGHHHHHHHH! Though a fun drinking game might be to drink every time they say the word “ovo”… you’re gonna be wasted before the intermission… NO creativity there at all… I really don’t think cirque knows how to be funny any more.

The costumes were pretty bad too. Ok, the grasshoppers were great but that was IT. There was one really cool amorphous mass kinda creature that was pretty neat but they didn’t really let his act end at all and also gave away how many people were in the costume part way through the act (at first you couldn’t tell). What a waste. I expected everyone to move more like insects… nope… crappy choreography instead in bad insect costumes. There was another really cool insect costume with lights on the ends of it’s legs, but the guy took it off to do his act, totally breaking the spell of him being an insect.

The black girl’s costume was particularly horrendous. a shower cap, some kid’s Styrofoam cutout idea of wings, a swim float around her waist and disco pants and platforms… really? I paid over $120 bucks and THAT is what you’ve got? Tickets range from 40 to 150 bucks. Maybe I should have gotten the $40 tickets.

As usual there’s NO story but there is a theme with a giant egg… but it doesn’t go anywhere and disappears and reappears but the egg in the end doesn’t seem to mean anything to anyone… they just kinda haul it around for no reason… shouldn’t it hatch or SOMETHING?

Well if you got kids they would probably love the show, but personally I have seen better. My son loved so maybe just for that it was worth going.