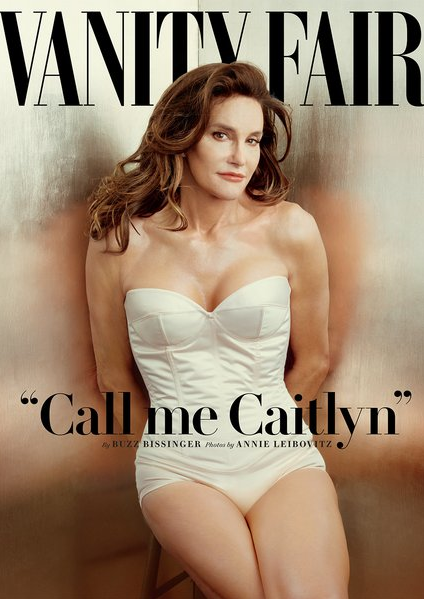 Yesterday Vanity Fair came out with their upcoming cover featuring Bruce Jenner as woman with new name: “Caitlyn Jenner”. In case you have no idea who is, he is the famous step father of the Kardashians, who was also a well know Olympian in the 70’s. This topic became the #1 topic on Twitter in the USA and the World. Many people had different opinions of his transition to woman.  I have not against him doing a sex change, by my personal feeling is why wait so long? He got married 3 times! So if he always wanted to be a woman, then why get married and why put his kids through this! It seems he was really selfish!

Here are just a few comments from around the web. Comment 1:
“Wow ok i don’t know what to say! Call me old fashioned or closed minded but a sex change at age 60+ with 5-6 kids is just ridiculous! I would understand if a teenager or someone in their 20’s decided to do a sex change but in his case it’s just very disturbing and i am sure his kids are very very sad, hurt and Confused. I did see the kids crying and talking about being confused and hurt but then they accepted cause it’s their dad.”

Comment 2: “Go ahead and unfriend me and call me a bigot and anything else you will because I have a different point of view than you!! Would you call a man crazy if he were to say that he was meant to be a dog, and that he can’t hide it anymore so he decided to get surgery to become a dog??? This is a serious question, no sarcasm! I don’t think that Bruce is a bad guy and I don’t hate him. I just don’t agree with what he is doing. Does that make me a bad person, I don’t think so. Just like it doesn’t make those who support him bad! If the world that supports his decision can make him a hero and talk about how brave he is, then why do those of us that don’t support and go against the grain get verbally attacked and called every name in the book? Do everyone a favor and don’t be a hypocrite, by not allowing others the freedom to disagree as you have the freedom to agree!”

Comment 3:
“If he’s true to himself and finally being who he really is, he would just be who he was BORN. Because the exact opposite of being yourself is getting a sex change. None of my business what anybody does with their life (or dick) but since it’s blasted in my face all day, that’s my perspective. If you need to change your genitals to FINALLY be happy in life, trust me it wasn’t the dick and balls keeping him from a life of bliss, the unhappiness is in his head and THAT you can’t operate on unfortunately.”

Comment 4:
“The fact that this is news…and gets the coverage it does…..is an example of everything wrong in this country….Any news outlet that perpetuates this garbage should be ashamed of itself”

Comment 5:
“Why are we still talking about a guy who hasn’t been relevant for decades and his no talent family who are famous for no other reason than they have no talent? Can we please move on to something that has our kids aspiring to do something? Thanks.”

Comment 6:
“Wow. Well, everyone deserves to be happy in their own skin. Who’s anyone else to judge how another lives their life?”

Comment 7:
“You look great, do not let the naysayers get you down. It is your life, live it like you want to”

Comment 8:
“I will not buy Vanity Fair in the future. This is shameful. If he wants to change it should not be given so publicity. It should be between him Dr and immediate family friends. Not the world. Love the person not the sin”

Comment 9:
“Holey Moley!!! He/She is coo coo for cocoa puffs!!! Then we wonder why this country is so screwed up!!! What kind of message does this send to our youth?!!! If you don’t like who you are change and become something or someone that you’re not. Then spend years in therapy and on meds figuring out what happened and why. Good God!!! Stop the insanity !!!!”

Comment 10:
“The sad thing in all of this, is that ever after all those surgeries , HE will never be happy. What he would like to be is not accomplish by surgeries, you are either born with it or not. I don’t hate on people like him, i love them and I pray for them, that one day they would wake up and look for Christ.”