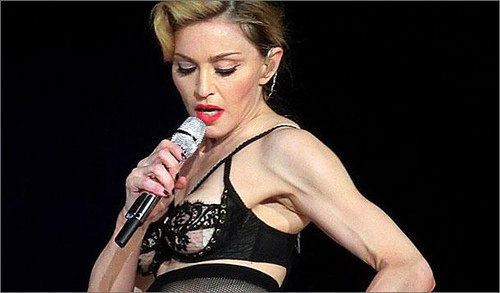 Even at the age of 53, Madonna continues to make headlines for her provocative behavior, but this time it might end in a lawsuit. ABC News reports that a French right-wing political party, Front National, is threatening to sue the Material Girl because she played a video of the party’s president with a swastika on her forehead during a concert in Paris. The president of the third largest political party in France, Marine Le Pen, is briefly shown in the video during a montage of famous faces. After her face comes up in the video, it shows the Nazi swastika on her forehead, followed by Madonna’s face with Hitler’s mustache.

Pen is known for her conservative views on same-sex marriage and the reduction of legal immigration into France.

This is not the first time the French party has seen this video. Madonna has played the video during other concerts on her tour, and the party has warned that it would “take action if the video were shown in France.” However, Madonna played the video at her concert on July 14 at the Stade de France.

In addition to showing the controversial video, Madonna garnered attention in Paris for flashing her nipple and buttocks. The Material Girls seems to love baring skin on stage because also flashed her nipple at a concert in Istanbul, Turkey on June 7, and dropped her pants during a concert in Rome.